Nurse Samantha Mull felt helpless as she held the hand of a dying COVID-19 patient, trying to provide a sense of comfort as his family members said their goodbyes over the phone.

Her interactions with the man had been brief but strangely intimate since he was admitted to Elmhurst Hospital’s intensive care unit a week earlier. She looked him in the eyes as he gasped for breath and told him everything would be OK. She talked him through the intubation process, which she performed while he was awake.

And in his final moments, Mull and a co-worker were at his bedside, sobbing over a man they barely knew as they watched him die.

For the last 10 months, health care workers have been carrying the weight of the pandemic on their shoulders, enduring anxiety, uncertainty, moral distress and fatigue as they fight a battle that’s out of their control.

Though that patient stands out in Mull’s mind, the scenario was in no way unique, she said. At the height of the pandemic, both in the spring and over the last several weeks, it’s not uncommon for front-line workers to witness multiple deaths a day, to deliver heartbreaking news virtually, to drop everything to be with a patient so nobody dies alone.

“People don’t see this part of it,” said Mull, of North Aurora, an ICU nurse for six years. “I’m exhausted. I’m emotionally drained. I feel like there’s still no end in sight.”

Some health care workers take on extra shifts and report feeling guilty in their time off. Others find it hard to balance work with additional stressors in their personal lives. And with a front-row seat to the impact of the respiratory disease, many are growing increasingly frustrated by a lack of community compliance with public health guidelines.

“They find themselves in two different worlds: One where they go to work at the hospital where people are dropping dead, and then they’re coming home and seeing people, frankly, be indifferent,” said Dr. Clifton Saper, lead clinical psychologist with the Amita Health Behavioral Medicine Institute. “That leads to a lot of anger and a lot of feelings of despair.”

In the early stages of a vaccine rollout, uncertainty remains over when front-line workers will be granted relief. Mental health experts say they have a long road ahead, both in overcoming the virus and facing the residual effects of psychological trauma.

“This is way, way more than anybody in health care has experienced before,” Saper said. Edward Hospital nurse Jessica Bromley says she has relied on her co-workers for support while working on the front lines of the COVID-19 pandemic for the last 10 months. “We’ve all been holding each other up, and we continue to do so.”
– Brian Hill | Staff Photographer

Suburban health care workers can remember when a single positive case evoked feelings of overwhelming fear at their respective hospitals.

That moment came in January for Amita Health St. Alexius Medical Center in Hoffman Estates, where the first confirmed COVID-19 patient in the Chicago area — and the second in the United States — was admitted, Saper said.

Weeks later, Edward Hospital in Naperville began caring for its first positive patient in the pulmonary medicine unit. Nurse Jessica Bromley and her colleagues were tasked with treating an infection they didn’t understand yet, with limited tools to help anticipate complications or perform interventions.

They didn’t know if the hospital’s protocols and personal protective equipment would prevent the spread of the novel virus, said Bromley, a Plainfield resident. She found herself at the center of a moral dilemma that pitted her patients’ care against the safety of her family.

That was the only time she has ever considered leaving the profession.

“The compassionate and caring nature of a nurse is very hard to weigh with the fear and risk of what we were being asked to do,” Bromley said.

As cases spiked across the suburbs, hospital systems ramped up incentives, instituted support groups and offered other mental health resources for employees at all levels.

Elective procedures were halted, and teams felt a collective rush of adrenaline as they adopted an all-hands-on-deck approach to combating the virus, said Dr. Sanjeeb Khatua, chief physician executive at Edward-Elmhurst Health. The community embraced that mentality, too, pledging to stay home, rallying around their health care heroes, and sending daily meals and messages of encouragement.

The pressures of the pandemic began to subside over the summer as positivity rates trended down. While the public breathed a sigh of relief, hospitals were suddenly balancing COVID-19 cases with a backlog of patients needing elective surgeries and other care, Khatua said.

By the time a second surge hit this fall, health care workers had learned how to better care for virus patients. But there was no operational pause in other units this time, no labor pool to fall back on, no rallying cry of community support — and yet a greater case count and more community spread than ever before.

“They just haven’t had a break,” Khatua said. “They still have the same issues at home as everybody else, and throw on top of that all this politicizing of simple scientific concepts that we should all be in together. That’s a mixture for what we’d call ‘COVID fatigue.'”

‘This is a marathon’ 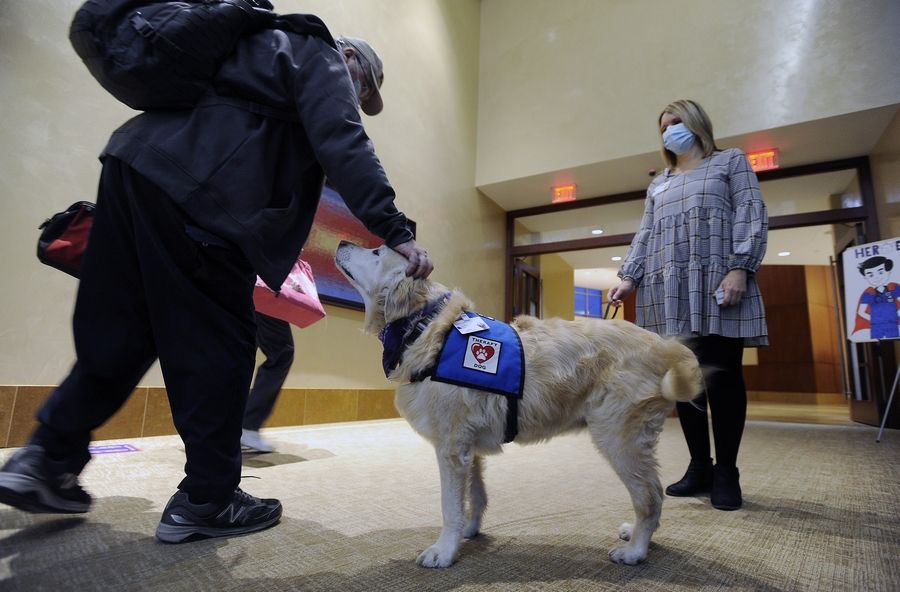 Her medical surgical unit had been filling up with positive patients when she left work on a Friday. By the time she returned Monday, two other units at the Glenview medical center were full — “that’s how quick it was,” she said.

“It was difficult to accept that it was going to be as bad as it was before, or even worse. … There was just the reality of, ‘Oh my gosh, we have to do this again,'” Cohen said. “I felt a little let down by the public.”

The community spread has been more prevalent in the second wave of infections than in the initial outbreak, straining the workforce as more employees and their families test positive, said Jeff Murphy, 2021 president of the Schaumburg-based Emergency Nurses Association’s Illinois chapter. Members have reported working longer hours and taking on extra shifts to ensure their units are fully staffed.

“Trying to absorb that many people who are out sick and still take care of a lot of patients has made this last stretch particularly exhausting,” Murphy said.

“This is a marathon. All our efforts aren’t going to go away once everyone is vaccinated,” said the Rev. Kathie Bender Schwich, Advocate Aurora chief spiritual officer. “We realize the emotional, mental and spiritual effects of all this will have a longer life, so we really are trying to change the culture of how we care for one another.”

‘Holding each other up’ 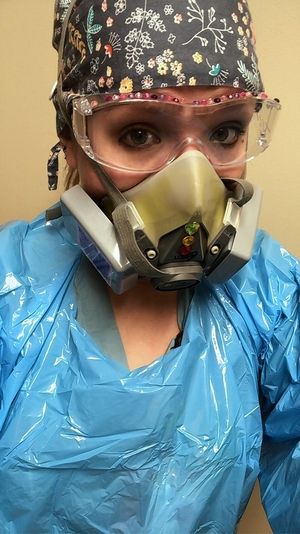 Elmhurst Hospital nurse Samantha Mull bedazzles her face masks differently at the start of every shift, one of several ways she practices self-care and tries to stay positive through the COVID-19 pandemic. “It’s the little things,” she says.
– Courtesy of Samantha Mull

At the start of the pandemic, Mull transformed her living room into a yoga studio.

She makes a conscious effort to paint her nails, go for bike rides and take relaxing baths. She even bedazzles her mask with a different design before every shift.

In the midst of chaos, Mull quickly realized the importance of finding an outlet and creating small joys. After a tumultuous year also full of unrest and political divide, self-care has never been more critical — “and don’t feel guilty about it,” said Michael Scholl, vice president of behavioral health at The Josselyn Center, a mental health clinic in Northfield and Waukegan.

“This is a situation where we have been met with more emotional needs than most humans can deal with,” he said.

As health care workers focus on moving forward through the pandemic, many find their strength from the doctors, nurses and others who understand what they’ve been through, Bromley said. They vent to one another in break rooms or call each other after they’ve had a hard day at work.

“None of us could’ve done this without each other. That’s the whole reason anybody’s able to get any care,” she said. “We’ve all been holding each other up, and we continue to do so.”

It’s also important to focus on the wins rather than the losses, Mull said. The 31-year-old patient who’s back home with his wife and kids after being on a ventilator for a month. The man who got a tracheostomy days ago but is now awake and smiling and communicative.

“That’s why I do my job, is to have those wins,” Mull said. “We’re still in this together, and we’re going to beat this. Even though we feel like we’re drowning and we feel like there’s no end in sight, we’re trying to make one.”