Those changes meant more people in grocery stores and fewer in restaurants. It meant reduced quantities of some items on grocery store shelves and higher prices for others. And it meant big changes for those who raise, process and serve food, as well as those who consume it.

“You see people lining up for donations at food banks. You see empty grocery store shelves. At the same time, you see farmers who are dumping milk, plowing under fields of onions and squash, and most recently reports of having to euthanize hogs” — the result of “mismatches in our food supply chain,” said Darci Vetter, former chief agricultural negotiator with the Office of the U.S. Trade Representative, during a May 12 webinar on “Global Trade: A Pandemic Primer” hosted by the National Press Foundation.

Those “mismatches” revealed problems in the nation’s food chain but also pushed changes that may last long after the pandemic ends.

MORE: This story is part of The 2020 Project, a look back at the year that changed us

Nathaniel Baer holds a “flat” of 30 eggs — two and a half dozen. It costs about $1.25 to produce. A flat brought a wholesale price of about $4 for about 12 days at the height of the marketing bubble but currently is about 30 cents. Mikkel Pates / Forum News Service

The supply chain that gets farm products to end consumers couldn’t change fast enough to account for the disruption when the pandemic hit.

So while grocery stores limited purchases of milk, some dairy farmers were dumping milk bound for foodservice destinations. Milk prices improved later, in part on the strength of cheese, a staple for people cooking at home.

The “shell” egg market saw a brief uptick when people began cooking more at home, but the “breaking” or “liquid” market dried up. As “liquid” eggs were diverted into the shell market, the price of eggs tanked. Producers had to decrease production or move flocks to slaughter faster.

In some places, produce was plowed under as it didn’t pay to harvest it, even as people lined up at food banks. But for some products, demand was high. Kurt Haarmann, senior vice president of Columbia Grain International, based in Portland, Ore., in June said pasta and other “shelf-stable” staples like pulse crops were “flying off the grocery shelves.”

Rural grocery stores became even more important as people tried to stay closer to home. And the grocery industry faced challenges from suppliers. Part of the issue remains that more people are buying groceries, while the other part is that processing plants have contended at times with keeping employees free of the virus.

“Some categories are still constrained. We continue to talk with our suppliers about how to keep our shelves stocked,” said Denise Osterhues, senior director of Corporate Affairs for The Kroger Co., during a session of the Sustainable Agriculture Summit, held virtually in November.

Restaurants, and the people who work in them, still have struggled. According to the National Restaurant Association, most states added restaurant jobs in October but the vast majority still lagged behind pre-pandemic employment levels.

One of the hardest hit areas has been the District of Columbia, which the National Restaurant Association reported remained 31% below pre-pandemic staffing levels in October. North Dakota Farmers Union’s Farmers Restaurant Group owns several restaurants in the D.C. area. Mark Watne, president of North Dakota Farmers Union, said the popular chain is doing about 55% of pre-pandemic business. Maintaining even that amount of business took innovation.

Founding Farmers is one of the Farmers Restaurant Group establishments owned by North Dakota Farmers Union. The restaurants are focusing on delivery and takeout options during the COVID-19 pandemic. Founding Farmers photo

“We did really three things. So one is, we’ve got the restaurants open with outside dining following the guidelines of the location … which typically is about a 50% occupancy rate, then we obviously did the curbside pickup and the delivery systems. That’s been going fairly well,” he said. “The last thing that we’re really focusing on is that we sell groceries from products that come from the same suppliers . . . that supply our restaurants.”

Even with “a really huge week” at Thanksgiving and downsizing staff, Watne said the chain is just breaking even.

Perhaps no segment of the ag and food industries suffered as much as the livestock industry, which faced food chain disruptions and coronavirus outbreaks in packing plants.

By mid-March, prices for livestock plummeted on concerns about demand from restaurants and events, though demand at grocery stores led to empty shelves. A tandem fear that COVID-19 would cause slowdowns or shutdowns at packing plants increased the price for meat.

As the disparity between live cattle prices and meat prices grew, cattle producers called for efforts to address record profits made by packers. The COVID-19 pandemic was the second event in less than a year that called attention to the situation, the first being an August 2019 fire at a packing plant.

Hog producers faced the reality of packing plant slowdowns and closures, which meant they had nowhere to go with market-ready hogs. The Smithfield Foods plant in Sioux Falls, S.D., was an early hotspot for the virus in the U.S. As that plant and others struggled with employee health, pigs had to be euthanized and composted.

Packing plants slowly opened back up and returned to work, and by October, Greg Ibach, USDA Under Secretary for Marketing and Regulatory Programs, told the North Dakota Stockmen’s Association convention that packing plant employees had “better protection when they’re at work … than they do when they walk out of the plant.”

To help farmers and ranchers dealing with low prices due to supply chain issues, the government created the Coronavirus Food Assistance Program, which paid out billions of dollars to producers in “CFAP1” and “CFAP2” to compensate for market losses. Also established was a Farmers to Families Food Box program, which was focused on both creating demand for food businesses hit by the pandemic and on providing food for those dealing with food insecurity.

In North Dakota, the Department of Health reported that as of Dec. 11, 37 people had obtained retail licenses to sell frozen, prepackaged, USDA or North Dakota inspected meat products to end consumers in the state — up from just 14 at the end of 2019.

An employee of Heart O’Lakes Meats works on meat processing on Friday, April 17, in Pelican Rapids, Minn. Heart O’Lakes has seen a big increase in demand for processing services during the COVID-19 pandemic. (Trevor Peterson / Agweek)

Lacey Block of Lake City, S.D., started her Ranchers Rebellion meat business shortly before the pandemic began, and she drew long lines of consumers looking for meat in May. Though Block continues to fill retail freezers and provide restaurants with beef, the pace is less frenzied now.

After COVID issues were solved for packing plants, many consumers — predictably — returned to the big box stores as prices returned to pre-COVID levels.

The future of food

By mid-December, the first vaccines to prevent COVID-19 were administered in the U.S. That brought hope that some level of normalcy would return to the world and to food systems.

The livestock industry wants to see changes that will prevent market disparities. Multiple pieces of legislation have been proposed in Congress. Sen. Chuck Grassley, R-Iowa, introduced legislation on a rule that would mandate packers buy at least 50% of their supply on the open market. Rep. Dusty Johnson, R-S.D., has introduced the PRICE Act, which promotes more small packers and creates a cattle contract library to increase transparency. The Department of Justice continues to look into complaints that packers have too much control in the industry.

The restaurant industry expects a strong return to business as virus levels decrease. Watne suspects people will be eager to return to restaurants.

Companies have had to find new ways to serve customers during the pandemic, and some seem likely to stick around. Photo taken Dec. 16, 2020, in Jamestown, N.D. (Jenny Schlecht / Agweek)

And while some things might go back to “normal,” some pandemic changes might stick around. For Farmers Restaurant Group, the pandemic provided a push to try new things. Curbside and delivery options have been popular, as have selling things like chocolate and coffee.

“We’ve always talked about kind of a retail outlet. We never developed it because we were very fortunate our restaurants are so busy. We didn’t have room in our kitchens to do it, but this will come in and this probably put us down the road further as another outlet for our product,” Watne said. “There’s going to be a great opportunity. And if you do it right, you’re going to be a winner out of this in the long term. You just got to go through the pain for a while.”

On a recent webinar on agri-food resiliency during the Virtual 2020 Minnesota Ag and Food Summit, panelists discussed how quickly they had made adjustments to take care of their customers.

“There’s a lot of debate over what we’re going to learn from COVID, what’s its lasting impact,” said Doug Baker, CEO of Ecolab. “Personally, I think, mostly what it will do is accelerate trends that were already in place. Trends around remote capability, trends around digitization of industrial practices.”

Hoeven agrees. He sees more possibilities and suspects North Dakota could lead the way with things like unmanned aviation for deliveries.

“Pretty soon you’re going to be able to order something and drones are going to deliver it to your doorstep,” he said. “And that’s real. That’s coming.”

This story is part of a 13-day series that looks at all the ways 2020 has changed us. From now until 2021, expect stories on workplace and education, sports, economics, politics and everything in between. 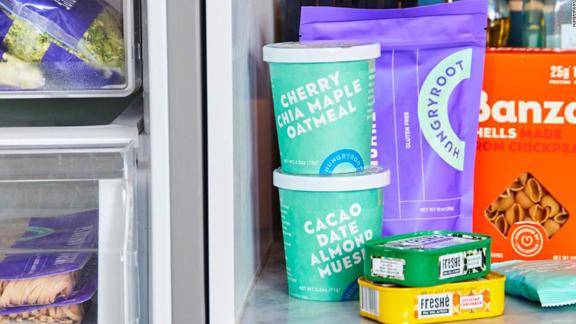